This show is available during business hours (Tuesday – Friday from 10 am – 5 pm) or on weekends by advance appointment only.

In this show, I offer you a cross-section of three themes I have been working on for the past three years: The Circus, Trees, and Musicians.  The Trees series began as an effort to bring closer attention to something we see as so ubiquitous that we hardly even notice them anymore.  There is beauty in a tree, if we take the time to look.  I enjoy rendering the patterns of the bark, the light through the leaves, the patterns of limbs in a specific tree.  These are all unique identifiers for each plant.  Each of the tree subjects I’ve done is a specific tree, and sometimes even has a proper name.  I am from the South, where there are many trees, and living in Nebraska, where they are less common, makes me pine for them even more.

With the Circus series, my goal was to capture the colorful variety of circus acts through abstraction to portray the geometric essence of movement.  Multiple, overlapping sequences of movement portrayed in a single image is nothing new; the Italian Futurist painters initiated that concept.  My work is less about forging ahead into a future of progress, dismissing the past and “burning the museums” than it is a look back to the concepts of earlier avant-garde painting through new eyes.  Art doesn’t always have to be revolutionary, and sometimes it's good to reexamine past innovations to gain new ones.

With the musicians, the initial inspiration came from classical jazz and mid-century modern styling.  Overlapping planes, bright colors, etc.  Think Joan Miró, S. Neil Fujita and Mary Blair.  I wanted to capture the movement of musicians as they played and sang. Music is a universal language, which is appealing. I photographed actual musicians I knew and used those references as the jumping off point.  I started with harder edges, like the mid-century modern artists, but as the series developed, they gradually became more expressive, loose and organic.  The more gestural brushwork, I think, captures the idea of movement, emotion and sound even better!

I enjoy allowing themes to direct what I paint, allowing the work itself to determine how it develops stylistically.  We can’t always plan everything out in advance, and little, unexpected surprises only make things more interesting. It’s not just about the end-product of the paintings, but about the journey making them as well.

Doug Waterfield is a tenured Professor of Art at the University of Nebraska, Kearney, where he teaches painting and art history classes. Originally from Arkansas, he is married with three children.  He enjoys watching old horror films, collecting autographs and good bourbon. 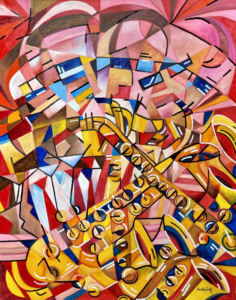