Minden Opera House was built in 1891 by Civil War veteran Wray Thorn. Wray settled in Minden after the Civil War and became a wealthy businessman and opened a general merchandise store. Wray passed away from Bright’s disease 2 years after building the Opera House. The building was sold to William Shapper, a German immigrant farmer, who owned the building for 13 years than traded the business to Judge Bruno Hostetler in 1912 for farm ground. In its hay day, the Minden Opera House featured plays and Monday night dances that drew traveling bands until entertainment events at the facility ceased in the late 1940’s.

The Opera House building, as originally constructed, included space for three separate businesses on the first floor, each with an opening to the street until the renovation in 1997. The Kearney County Community Foundation purchased the existing building in 1997 after receiving two $300,000.00 bequests, one from the Estate of Vane and Alta Nied and one from of Nels & Lucille Winther. The decision was made to gut the building from top to bottom and put in the beautiful stairway, Gift Shop, Art Gallery and meeting rooms.

The Kearney County Community Foundation worked for several years on the planning and completion of the project at a cost of $2.8 million dollars, which was supported totally by grants and donations. The Minden Opera House Board was elected from organizations in the community to operate the facility. Memorial Day weekend of 2000 marked the grand opening of the beautiful “new” Minden Opera House and it has become the center for the Arts in South Central Nebraska and the entire surrounding area. 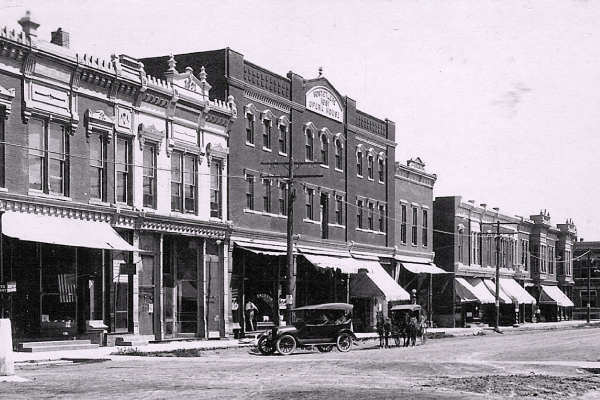 The mural on the ceiling was painted on heavy muslin by the Mural Arts Company out of San Francisco and applied to the ceiling like wall paper would be. The mural depicts the history and the agricultural economy of the County with a seasonal orientation.

There are approximately 2500 “stars” in the fiber-optics lighting system in the “sky” which is an accurate star system above Minden in Mid-March. The twinkling effect is created by a slight agitation of the 4 fiber optic bulbs concealed in the ceiling. Three shooting stars occasionally appear in the sky.